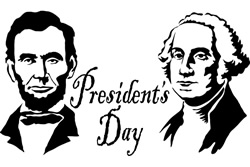 Presidents’ Day is an American holiday celebrated on the third Monday in February. Originally established in 1885 in recognition of President George Washington, it is still officially called “Washington’s Birthday” by the federal government. Traditionally celebrated on February 22—Washington’s actual day of birth—the holiday became popularly known as Presidents’ Day after it was moved as part of 1971’s Uniform Monday Holiday Act, an attempt to create more three-day weekends for the nation’s workers. While several states still have individual holidays honoring the birthdays of Washington, Abraham Lincoln and other figures, Presidents’ Day is now popularly viewed as a day to celebrate all U.S. presidents past and present.

The story of Presidents’ Day date begins in 1800. Following President George Washington’s death in 1799, his February 22 birthday became a perennial day of remembrance. At the time, Washington was venerated as the most important figure in American history, and events like the 1832 centennial of his birth and the start of construction of the Washington Monument in 1848 were cause for national celebration.

While Washington’s Birthday was an unofficial observance for most of the 1800s, it was not until the late 1870s that it became a federal holiday. Senator Steven Wallace Dorsey of Arkansas was the first to propose the measure, and in 1879 President Rutherford B. Hayes signed it into law. The holiday initially only applied to the District of Columbia, but in 1885 it was expanded to the whole country. At the time, Washington’s Birthday joined four other nationally recognized federal bank holidays—Christmas Day, New Year’s Day, Independence Day and Thanksgiving—and was the first to celebrate the life of an individual American. Martin Luther King Jr. Day, signed into law in 1983, would be the second.

Information courtesy of www.history.com. Visit the site to learn more.