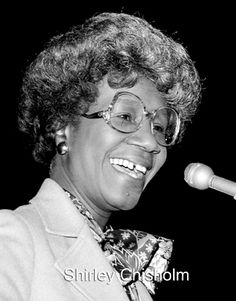 For the month of August, the highlight is Women’s Equality.  Despite anyone’s political affiliation, the fact remains that we all have witnessed history with the first female securing the Democratic presidential nomination.  However, the struggle that led to that moment did not solely belong to the nominee.  Many have fought for political equality; one in particular – Shirley Chisholm (1924 – 2005).

Shirley Chisholm was born in New York in 1924.  At the age of 14, she met Eleanor Roosevelt who inspired her. After many years as a school teacher, Chisholm entered politics – she knew changes were needed and had to start somewhere.  She was elected as the first black woman in Congress in 1968.  In 1972, she placed her bid as a democratic presidential candidate.  Despite the mounting death threats, she continued to campaign.  Although she lost, she still felt she won; the campaign, Unbossed and Unbought, shed a light on gender inequality and many other issues.

Her continued efforts over the years resulted with seven Congressional terms, as to which she only hired women to work in her office.  Moreover, she was a founding member of the National Women’s Political Caucus (1971) and the National Political Congress of Black Women (NPCBW, 1982).

Her courage and pioneering example resulted with an honorary stamp issued by the United States Postal Service, with a corresponding biography video on  YouTube.  Please take the time to learn of the impressive legacy of Shirley Chisholm.

While watching the video, think about something. If it weren’t for the relentless efforts of Shirley Chisholm, and many others before her, can we say things would be the same today? Would we still have witnessed the shattering of the glass ceiling?

Although we are close, we still have a fight.  Our battle doesn’t belong to us, it belongs to our daughters, and their daughters, and many generations to follow.  One day, we will be the ancestors remembered as those who tirelessly helped to pave the way…

After all, we are Federally Employed WOMEN!