We are all aware of the many struggles women have faced regarding the fight to balance gender equality.  However, part of the struggle includes historical legislation.  Below is an article, written by J. Lewis (womenshistory.about.com), explaining the efforts of former President John F. Kennedy.  Enjoy…!

President’s Commission on the Status of Women

While similar institutions with the name “President’s Commission on the Status of Women” have been formed by various universities and other institutions, the key organization by that name was established in 1961 by President John F. Kennedy to explore issues relating to women and to make proposals in such areas as employment policy, education, and federal Social Security and tax laws where these discriminated against women or otherwise addressed women’s rights.

Interest in women’s rights and how to most effectively protect such rights was a matter of growing national interest. There were more than 400 pieces of legislation in Congress which addressed women’s status and issues of discrimination and expanding rights. Court decisions at the time addressed reproductive liberty (the use of contraceptives, for instance) and citizenship (whether women served on juries, for example).

Those who supported protective legislation for women workers believed that it made it more feasible for women to work. Women, even if they worked a full-time job, were the primary childrearing and housekeeping parent after a day at work. The supporters of protective legislation also believed that it was in society’s interest to protect women’s health including women’s reproductive health by restricting hours and some conditions of work, requiring additional bathroom facilities, etc.

Those who supported the Equal Rights Amendment (first introduced in Congress soon after women won the right to vote in 1920) believed with the restrictions and special privileges of women workers under protective legislation, employers were motivated to higher fewer women or even avoid hiring women altogether.

Kennedy established the Commission on the Status of Women in order to navigate between these two positions, trying to find compromises that advanced the equality of women’s workplace opportunity without losing the support of organized labor and those feminists who supported protecting women workers from exploitation and protecting women’s ability to serve in traditional roles in the home and family.

Kennedy also saw a need to open the workplace to more women, in order to have the United States become more competitive with Russia, in the space race, in the arms race — in general, to serve the interests of the “Free World” in the Cold War.

The Commission’s Charge and Membership

Executive Order 10980 by which President Kennedy created the President’s Commission on the Status of Women spoke for women’s basic rights, opportunity for women, the national interest in security and defense of a more “efficient and effective utilization of the skills of all persons,” and the value of home life and family. 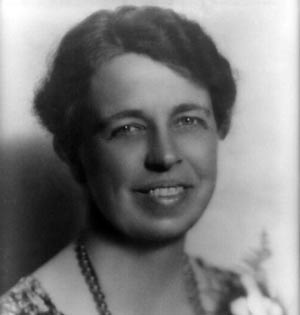 Kennedy appointed Eleanor Roosevelt, former US delegate to the United Nations and widow of President Franklin D. Roosevelt, to chair the commission. She had played a key role in establishing the Universal Declaration of Human Rights (1948) and she’d defended both women’s economic opportunity and women’s traditional role in the family, so she could be expected to have the respect of those on both sides of the protective legislation issue. Eleanor Roosevelt chaired the commission from its beginning through her death in 1962. 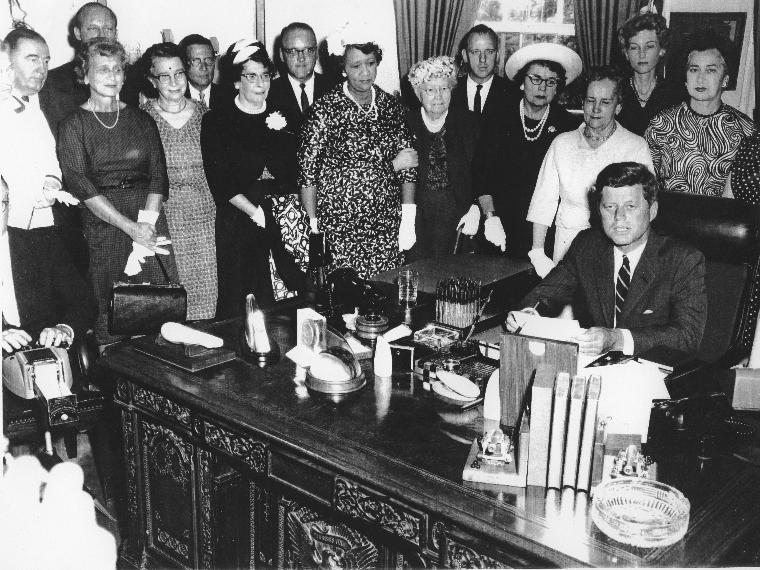 The twenty members of the President’s Commission on the Status of Women included both male and female Congressional representatives and Senators (Senator Maurine B. Neuberger of Oregon and Representative Jessica M. Weis of New York), several cabinet-level officers (including the Attorney General, the President’s brother Robert F. Kennedy), and other women and men who were respected civic, labor, educational, and religious leaders. There was some ethnic diversity; among the members were Dorothy Height of the National Council of Negro Women and the Young Women’s Christian Association, Viola H. Hymes of the National Council of Jewish Women.

The Legacy of the Commission: Findings, Successors

The final report of the President’s Commission on the Status of Women (PCSW) was published in October 1963. It proposed a number of legislative initiatives, but did not even mention the Equal Rights Amendment.

The public notice given to the report led to considerably more national attention to issues of women’s equality, especially in the workplace. Esther Peterson, who headed the Department of Labor’s Women’s Bureau, spoke about the findings in public forums including The Today Show. Many newspapers ran a series of four articles from the Associated Press about the commission’s findings of discrimination and its recommendations.

As a result, many states and localities also established Commissions on the Status of Women to propose legislative changes, and many universities and other organizations also created such commissions.

The Equal Pay Act of 1963 grew out of the recommendations of the President’s Commission on the Status of Women.

The Commission dissolved after creating its report, but the Citizens Advisory Council on the Status of Women was created to succeed the Commission. This brought together many with a continuing interest in various aspects of women’s rights.

Women from both sides of the protective legislation issue looked for ways in which both sides’ concerns could be addressed legislatively. More women within the labor movement began to look at how protective legislation might work to discriminate against women, and more feminists outside the movement began to take more seriously the concerns of organized labor in protecting women’s and men’s family participation.