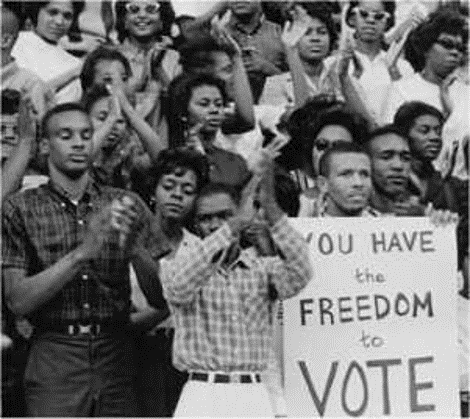 This year’s theme for Black History month is “African Americans and the Vote.”

2020 marks the 150th anniversary of the Fifteenth Amendment (1870) which gave the right of black men to vote following the Civil War. It also marks the centennial of the Nineteenth Amendment and the culmination of the women’s suffrage movement.

This year’s theme, then, recognizes the struggle for voting rights among both black men and women throughout American history. It is an ongoing struggle experienced by people of color that continues into the 21st century.

Black History & The Right to Vote

Even before the Civil War, free black men first petitioned state legislatures for the right to vote, but it wasn’t until 1870 when the 15th Amendment was ratified providing that “the right to vote shall not be denied or abridged on the basis of race, color or previous condition of servitude.”

Even so, southern state legislatures immediately began undermining the protections found in the new amendment. Years of lawsuits and protests followed, but it wasn’t until the rise of the Civil Rights Movement and Voting Rights Act of 1965 that the freedom to vote was enjoyed by a majority of southern blacks.

Today,these freedoms have again been eroded by state legislatures that have put ‘gerrymandering’ – or dividing voting districts to gain an unfair majority – into widespread practice. Harsh voting restrictions have also been enacted to discourage voting among poor blacks.

The ongoing struggle may seem disheartening, but recently the 2018 US midterm election saw a surprising record number of minority and women voted into state legislative power coast to coast. The voting tallies sparked new hope of an historic pendulum that was swinging back – again – to equal voting rights for all.

All about Black History Month

Black History Month first originated as part of an initiative by writer and educator Dr. Carter G. Woodson, who launched Negro History Week in 1926. Woodson proclaimed that Negro History Week should always occur in the second week of February — between the birthdays of Frederick Douglass and Abraham Lincoln.

6, every American president has proclaimed February as Black History Month. Today, other countries such as Canada and the United Kingdom also devote an entire month to celebrating black history.

The Web is a great place to find out more about that history — in poetry, literature, the arts, sciences, sports and entertainment — making Black History Month a time of fun, celebration, and learning.

Bringing the gifts that my ancestors gave, I am the dream and the hope of the slave. I rise I rise I rise.
— Maya Angelou “Still I rise,” And Still I Rise (1978)

February was chosen because of the birthdays of Abraham Lincoln and Frederick Douglas. Became a national observance in 1976.

Thanks to President Gerald Ford, Black History Month was again brought into the spotlight in 1976. Ford highlighted the connection between American history and African-American history by recognizing the celebration officially during the celebration of the United States Bicentennial, also corresponding with the 50th anniversary of Negro History Week. Ford pushed for all Americans to “seize the opportunity to honor the too-often neglected accomplishments of black Americans in every area of endeavor throughout our history.”